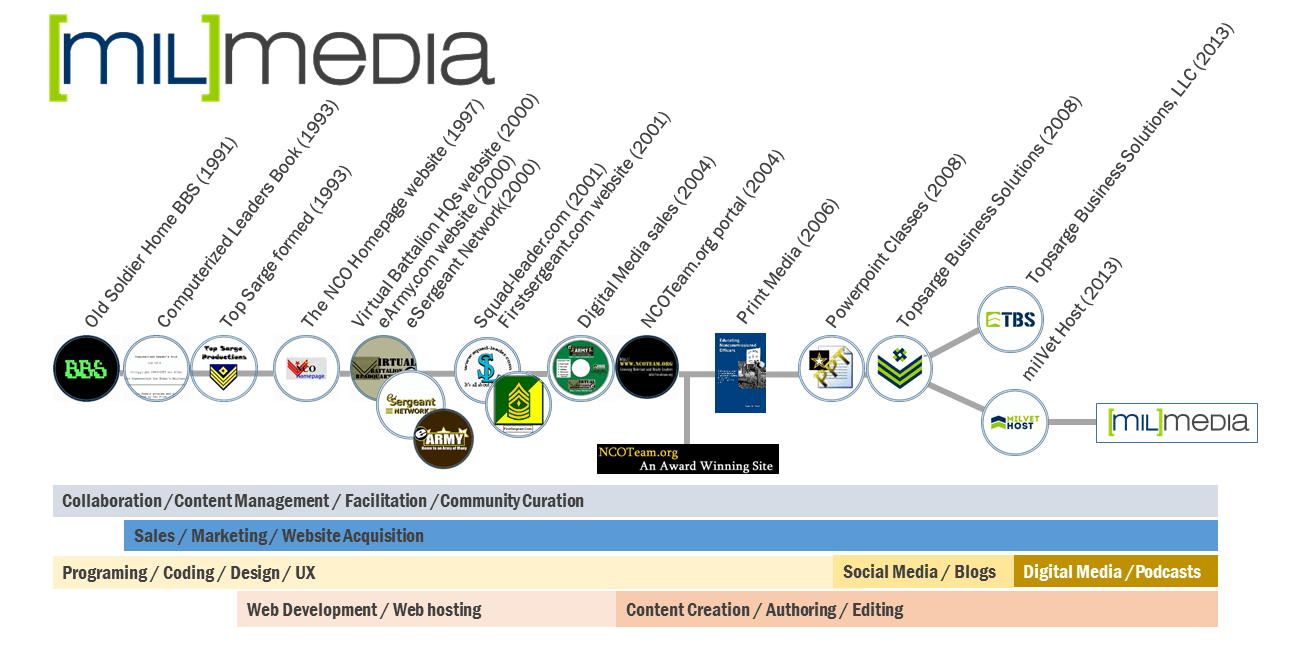 Founded in 1991 as The Old Soldiers Home BBS, a military oriented Bulletin Board Service (BBS) near Fort Knox, KY, milMedia operates some of the longest continuously operating web portals for military members today. We began to offer a line of computer software specifically for soldiers in 1994 and established our first World Wide Web presence in 1997. In 2008 milMedia reorganized in Bell County, Texas, establishing a full-time presence in Temple, TX. milMedia continues as a service provider for its partners and customers, and in 2010 began offering expamded services across a broader spectrum.

The NCO Websites (NCO Website, vBnHQ, SquadLeader.com, FirstSergeant.com, eArmyHQ.com, and NCOTeam.org) were a labor of love of our founder, Command Sergeant Major (Retired) Dan Elder that combined his two passions…the Army, and computers. Initially began in 1991 as “The Old Soldiers Home a Bulletin Board Service (BBS)” in the days before the World Wide Web existed, it would not be until May 1997 that milMedia would establish a full-time web presence. In 2003 anchor site Squad-leader.com was designated a US Army “Best Practice,” and in 2005 and after more than 8 successful years, the core NCO Website NCOTeam.org was donated to the US Army.

NCO Net (now a subset of the US Army CALL forums) was the brainchild of Elder. It was an outgrowth of the original NCO Website, born in 1997, and transformed to Squad-leader.com, eArmyHQs, Firstsergeant.com, Virtual Battalion Headquarters, and eventually NCOTeam.org. NCOTeam was given to the Army (gifted) in October 2005 and now serves as the foundation for NCOnet, a key element of the US Army Combined Arms Center online communities. NCOTeam was the final incarnation of the suite of sites ran by Elder using the information from the original NCO Website directory and Squad-leader.com, which made an important impact on how information was made available to soldiers of all ranks.

The journey began prior to the days of the World Wide Web. The seed was planted in 1991 when Dan’s coworker bought a x286 computer and wondered what to do with the modem that came with his system. From that point on, Elder has been pushing the idea of connecting soldiers and sharing information.

Before the Internet explosion, the primary method for telecommunication was through Bulletin Board Services (BBS). Elder developed and operated the Old Soldiers Home BBS, in 1991 in the Fort Knox/Radcliff, KY area. BBS users were assigned a nickname or “handle,” similar to Citizen Band (CB) radios. He was a SysOp (Systems Operator) for The Old Soldier’s Home BBS for about 3 years (1991-1993) and was known as “Top Sarge” The handle has stuck ever since. Elder still occasionally get emails from those who were members on the site. The Old Soldiers Home BBS later became the National Data Exchange, then the National Data Service BBS (NDSBBS.COM).

Elder began building the NCO Website in April 1997, and it went online in May. He was interested in learning how to program in web language (HTML, or HyperText Markup Language) and took an online course with Ziff-Davis University. He had as a course requirement to build a webpage and chose to combine what he knew (the Army) with his hobby, telecommunicating. He had dabbled in computing for about 8 years by then before the web became popular.

The idea behind the NCO Website was a directory, a la Yahoo, but for sites of interest for US Army NCOs. There were many sites online that were multi-service or for specific groups (unit associations, organizations, etc.). He had stumbled upon http://www.enlisted.com, but it was directed to junior soldiers and it did not offer much capability. He believed that computers and the world wide web would become a major tool for NCOs, which it has, and worked to build a web site for NCOs, by NCOs.

Soon after designing NCO Network, Elder began to get ideas from some of the visitors. It expanded from a directory to an online community of practice for NCOs to share items of interest, discussion topics, and a place to ask questions and to get answers, correctly. As a companion to the web site, the NCO Zone, an email discussion group, was developed. At its peak, over 800 NCOs participated in this LISTSERV. The site also included a threaded discussion forum where users participated in discussion and dialoged amongst the members. It also offered time-saver tools and programs, shared files, and a directory of some of the most useful and popular military sites in the .mil and .com domain.

In the Fall 1997 edition of The NCO Journal, Elder penned an article on NCOs and Computers, and how to leverage the Web. NCO Website provided a three-page directory listing of “Important WWW addresses for NCOs.” The edition focused on the growing trend of the computer and internet, and it also listed Elder’s first article for the Journal, “Work the WWW.” It was immediately incorporated in to the training conducted at the US Army Sergeants Major Academy and became a Handout.

In 1999 Elder developed Firstsergeant.com and the Squad Leaders Tool Kit. Ever changing to understand the expectations of soldiers, the sites transformed in 2000 to eArmyHQs, then Virtual Battalion Headquarters, and eventually Squad-leader.com. Squad-leader.com grew in popularity and became the face to field for online NCO interaction and served as a focal point for all the sites as he worked to adjust the look and feel. Elder began to recruit and use peer mentors, or soldiers from the field who participated and emerged as informal leaders on the site. Additionally, different themed areas were sponsored by a growing number of volunteer soldier editors who took on some of the arduous tasks of keeping the sites operational.

As the NCOTeam volunteers became more exposed to useful applications they included as part of the site sponsored online chats, situational challenges, like the regular feature Think Like a Sergeant, and sharing of TTPs based on ongoing operations. An early success of collaboration included the Firstsergeant.com initiative to improve casualty evacuation in the Combat Training Centers (CTCs) using Tactics, Techniques and Procedures (TTPs) from First Sergeants, Subject Matter Experts from the TRADOC Schools, Observer/Controllers from the CTCs, and Center for Army Lessons Learned (CALL) handbooks. Another successful event was the use of live Chat Sessions with senior noncommissioned officers from across the Army to share knowledge with members of the sites. After Operation Anaconda in Afghanistan, 1SG Rudy Romero granted an electronic interview to Squad-leader.com and his comments were made available to all the members.

In October 2003 the Office of the Sergeant Major of the Army sponsored an NCO.mil prototype in partnership the Combined Arms Center (CAC) and US Army CIO/G-6 to kick-off which began the effort for the Army to adopt the sites. Squad-leader.com would become one of the centerpieces of an Army effort to build Communities of Practice (CoP) under a single organization. In the final iteration of changes in the public domain, the majority of the sites ran by Dan Elder were merged with NCOTeam.org as it became a sponsored pilot for the future NCO Net as part of BCKS.

As the Team began to collaborate with the Army in developing official communities of practice, the group of volunteers led by Elder focused on the critical areas of importance for the site. The site still served its initial mission of a directory of links grouped and categorized by functional areas, downloads of useful documents, tools, and software, and threaded discussions.

The team members met many soldiers through the NCO Website, and have helped many young soldiers through dilemma’s. Elder received upwards of a 100 emails a week through or related to the NCO Website. From requests to help find buddies from war, to soldier questions in the field, to words of thanks and encouragement. One soldier noted, “I have used this site for many years now. It has helped me become a better leader and do what I truly believe in, Taking Care of Soldiers. I tell all of my soldiers I do not know everything. They know things I do not know, and I know things they do not know, but it does no good unless we share that knowledge and put it to good use for the army, the mission, the soldiers. This site has been extremely helpful in fulfilling those needs” reminds us that there are many who used these sites as their portal to the rest of the Army.

In Aug 2003, CSM Dan Elder was awarded the first (and only) US Army Knowledge Management Pioneer Award by the Army CIO/G-6 for his personal efforts in connecting soldiers through online forums.

In October of 2005 Elder donated the entire enterprise to be run by professionals as the central point of NCO forums on the web at the US Army Sergeants Major Academy, Fort Bliss, TX, now online at https://nconet.army.mil.

In 2007 NCOnet won the US Army CIO/G-6 Migration Award at the annual Knowledge Management awards.

In 2011 the NCOnet (and the other professional forums) moved to the Center for Army Lessons Learned (CALL).

It was announced by SMA Ray Chandler in August 2014 that the Army could no longer afford to maintain NCOnet and that it would not continue beyond Sept 2014.